On the 19th of June, groups from across Lewisham came together to discuss the ways in which their borough could become London’s first Borough of Sanctuary. The event brought together businesses, community groups, faith groups, Goldsmiths University and the council, all determined to make their community a more hospitable place for asylum seekers and refugees as well as tackling the government’s ‘Hostile Environment’. The council have demonstrated their commitment to becoming a genuine place of sanctuary, with Councillor Kevin Bonavia explaining how Lewisham Council agreed to rehouse 100 families under the UK Government’s Syrian vulnerable person resettlement scheme, in addition to 17 families supported to move to the borough in 2017. In order to ensure that community resources are used efficiently and refugee and asylum seeker needs are met, the Lewisham Refugee and Migrant Network produced a document seeking to understand sanctuary in communities in order to discover how Lewisham could become a Borough of Sanctuary. The group carried out a listening exercise in order to understand how they could help refugees and asylum seekers in their area:

‘We asked groups taking part in the listening exercises to keep the conversation open, as we wanted to prioritise the ideas and viewpoints of those who have migrated to the UK from another country. 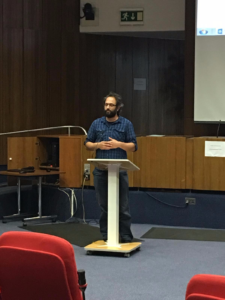 We wanted to understand what are the barriers and challenges they face, as well as their thoughts on what the borough and its people can do to help their integration into our communities.’

The initial findings identified what refugees and asylum seekers in Lewisham perceived to be the main barriers they face in the borough, as well as understanding what makes a place of sanctuary. Listening exercises like this present a valuable opportunity to understand the needs and challenges, and demonstrate a commitment to being a place of sanctuary with refugees and asylum seekers at the heart of the process.

The Lewisham event exhibited cross sector engagement in the process of becoming a Borough of Sanctuary, with speakers from across the area. Lewisham Council has been actively advocating the movement, embedding their dedication to becoming a Borough of Sanctuary in their Corporate Strategy from 2018-2022. The strategy mentions the council’s desire to ensure that Lewisham is a welcoming place of safety for all, stating that they will only prove successful once the Borough ‘[welcomes] those fleeing violence and persecution in their own countries, and protects the rights of all migrants, asylum seekers and refugees.’ Change cannot come from one group alone, the sanctuary moment works best when it comes from grass-roots, community-led action. However, councils can be a powerful ally to help act as a catalyst for political change and embed support which permeates all levels of a society.